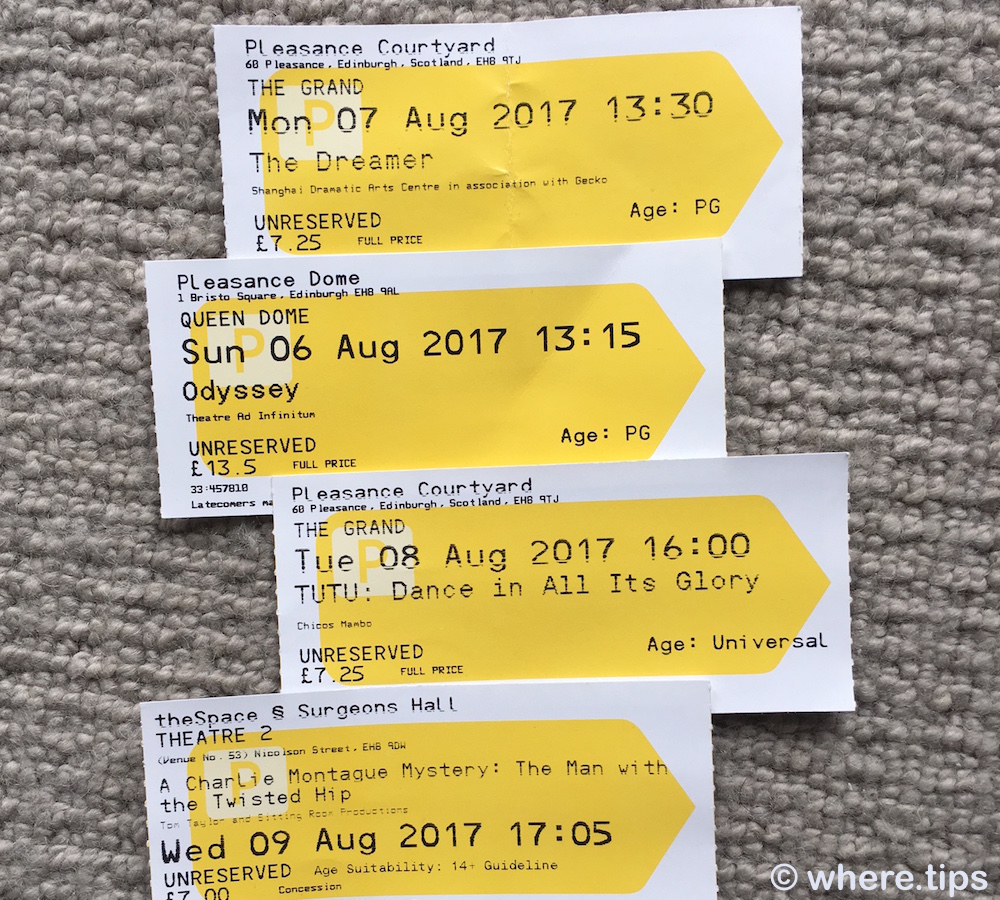 August 13, 2017 The Englishman Who Ate Everything Leave a comment

Whether you visit the Edinburgh Fringe every year or whether this is your first Fringe, it’s always difficult to get independent recommendations about what’s worth seeing.

As you walk around Edinburgh, hundreds of flyer distributors will try to hand you a glossy sheet and promise you a great show, a really funny comedy, a super experience. Many of the touters that I asked hadn’t actually seen the show they were advertising; some knew one of the cast, some had a friend who “really enjoyed it”, one had a sister who “does the make-up”, two were “just handing out these flyers” and one man was shouting “shiny flyer here – it’s really shiny”.

Some of the touters are members of the cast themselves, often walking around in costume to increase the chances of having their flyer not only taken but actually read and converted into a ticket sale. This year we’ve met Idi Amin Jr., a Canadian Mountie, various fruit and veg, men on stilts and men in stilettos, women dressed as mice and women dressed as men, Koreans with and without drums – but mostly with, a gentleman in a cravat, a gentlewoman dressed as a cat (just around the corner from the mice). I could go on.

Based on visiting 26 shows, here are my highlights of the performances that I saw at the 2017 Edinburgh Fringe:

If you only think of classical ballet when you hear the word dance or you’re convinced that you’re not into dance in any shape or form, then I would encourage you to move outside of your comfort zone and see one of these shows – they will change your mind!

★★★★★  Having thoroughly enjoyed Gecko’s Institute at the Fringe two years ago, I was eager to see The Dreamer this year. It’s a co-production with the Shanghai Dramatic Arts Centre and it didn’t disappoint. The Gecko hallmarks were certainly there; impressive set design, personalized lighting (lights attached or carried by the dancers) and half-heard conversations mumbled by the interacting dancers. The Chinese group add creative shadow play and intricate hand movement to the mix – even the haunting violin melody is reminiscent of Wong Kar Wai’s In the Mood for Love. All-in-all, the highlight of our Fringe.

★★★★☆  If men dressed in tutus is your thing then Tutu: Dance in all its Glory is male ballet dancers wearing tutus. If tutus are not your thing, they also wear fruit helmets, duckling costumes and the oversized frilly pink jodhpur-like creations shown on their striking advertising posters. Their 20 or so performance pieces are mostly comical, sometimes hilarious, very occasionally too long … but always impressively professional.

★★★★★  Oscar Wilde fans will love To Hell in a Handbag. Although this standalone drawing room comedy borrows two characters, Canon Chasuble and Miss Prism, from The Importance of Being Earnest, it can be enjoyed without knowing Wilde’s play. An impressive and refreshingly professional performance by the co-authors shows off the talents of these two accomplished actors.

★★★★★  A play with an accordionist and two mime artists might invoke the sounds of French chanson and images of white gloves. Translunar Paradise isn’t either. It’s a delicate, thought-provoking mime about old age, marriage, loss, happy memories and letting go – all woven together by minimalistic accordion sounds and rhythmic vocals from an accomplished player. Amazing stuff.

★★★☆☆  There are two Charlie Montague mysteries at this year’s Fringe. We enjoyed The Game’s a Foot, Try the Fish towards the end of its successful run last year so we opted for A Charlie Montague Mystery: The Man with the Twisted Hip this year. The actor’s charm is infectious and he manages to lead the audience through his contorted mystery with confidence and ad-libs. The potential is certainly there but the piece still lacks the polish that a few more performances will certainly bring.

★★★★★  The best solo performance that we saw was Odyssey by Theatre Ad Infinitum. One actor plays the parts of mortals and gods. The storytelling with words and noises is magnetic; it draws you into the lives of Odysseus and Penelope and leaves you almost as breathless as George Mann.

★★★★☆  Take a 2 hour journey from Sydney to Alice Springs in the company of two drag queens and a transsexual on their pink bus Priscilla Queen of the Desert. It’s an amateurish but fun and poignant romp across Australia with very accomplished performances from the three main characters. A great show to round-off any day at the Fringe.

Enjoy your Fringe – and please let me know if you agree or disagree with my selection!